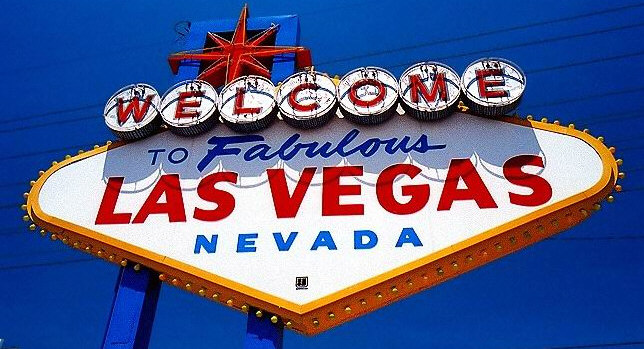 The following is a summary of what I presented at this year’s PubCon conference held in Las Vegas. The session deals with the following questions: “Does social media prevent the need for search?” or “Does social media play an important role in search?” The session, which drew a packed house, took a look at both sides of the issue, and discussed where the two intersect.

I was joined my my esteemed colleagues, Tony Adam, Bill Hartzer and Rebecca Murtagh. The session was moderated by Aaron Shear. Aaron introduced me as one “who has been around for awhile.” I guess he was trying to say in a nice way that I’m a dinosaur. I suppose that is factual as I’ve been in Internet marketing since 1997. Wow, that’s 13 plus years! Where has the time gone.

Anyway, back to the presentation. The two questions are almost related to all the talk this year about whether Facebook was going to be the next Google killer to which I responded that they would certainly not be. While Google has dabbled into just about everything one could think of, with exception of retail (they haven’t acquired Walmart yet) or even casinos for that matter (remember we’re in Vegas), they are still at their core a search engine. Facebook on the other hand, even though they have serch built in (which sucks I might add) is a social network – a place for community.

Having said that, search is still very important and with all our clients, Google with their 70 some percent market share of search is always the number one referrer of traffic. I did share a screen shot from an anonymous client that I can’t show here proving this fact. However, Facebook and Twitter did show up in their top twenty referrers but with much lower traffic numbers than Google.

Social media also plays an important role in search. Just look at the SERPs for any brand that is heavily involved in social media and you will see a list of results like the example below for Vertical Measures, a company belonging to a good friend on mine. 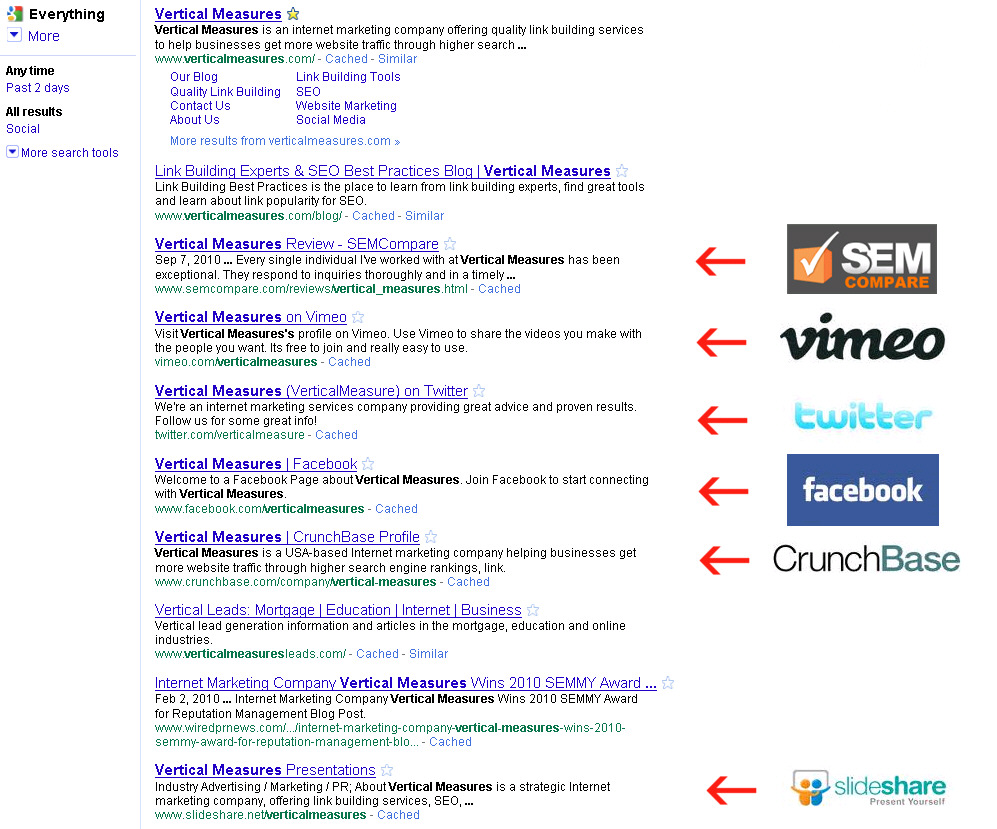 If you look at the image below which shows the top 20 visited sites according to Alexa, you can clearly see how important social media has become. In fact one would be naive to neglect making sure they had an active presence at least on the top two social media sites – Facebook and Twitter. 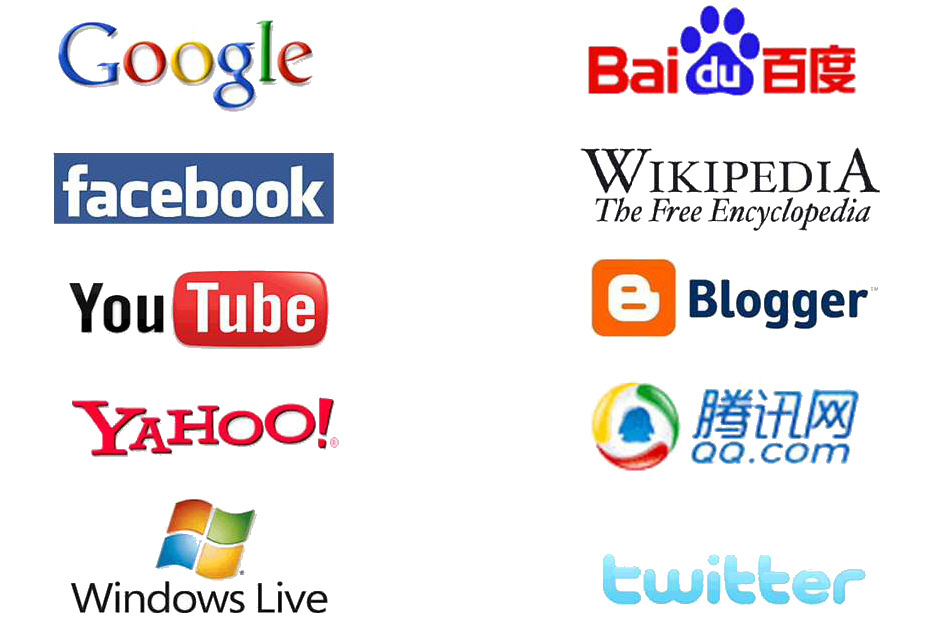 People are also spending a lot of time on social media sites as shown by the image below. 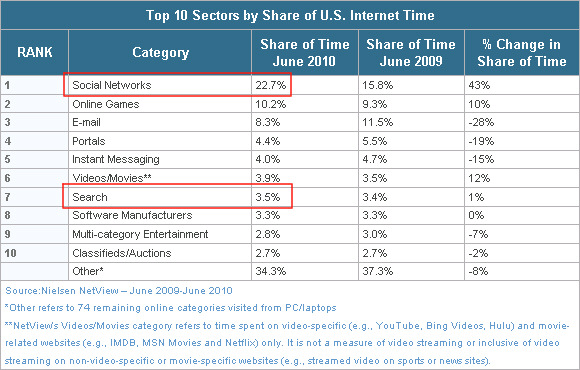 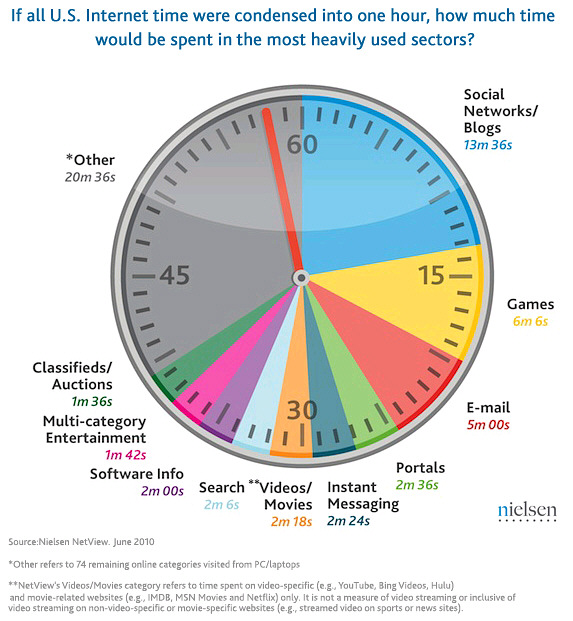 We have a client, who shall remain anonymous, that two years ago was completely reluctant to embrace social media. “We don’t have time,” “we don’t know what kind of content to create,” “we don’t want people to talk negatively about us,” were some of the excuses. Once those excuses were refuted, they agreed to setup a Facebook page. Last year I as I presented their case study in this very same session, they had 1,700 Facebook fans. A year later they now have 48,000 and that number continues to grow.

Not only have they seen amazing growth in their fan base, those fans are very active on the client’s Facebook fan page itself. In the month of October, they had the following statistics:

Not too shabby for a medium sized etailor. And what these stats really show is that their fan base is active or in other words engaged with the brand. This is exactly what you want to happen in a social media environment. Some of they ways they use this channel is to promoted blog content, hold contests and offer discounts, introduce new products, perform customer service and ultimately engage their customer base. Without giving exact statistics, they have seen tremendous growth over the last couple of years and I’d say that social media had a big part in that growth.

So what are some effective strategies that can be employed via social media to not only build brand loyalty but increase sales and customer acquisitions.

A decade ago we told clients to make sure they included their web address on all forms of advertising (i.e. business cards, brochures, commercials, etc.). Now we are telling them to include links to their social media accounts (mainly Facebook and Twitter) on advertising as well as their web sites. 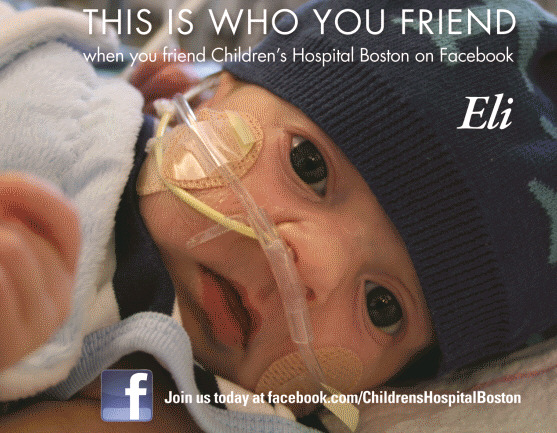 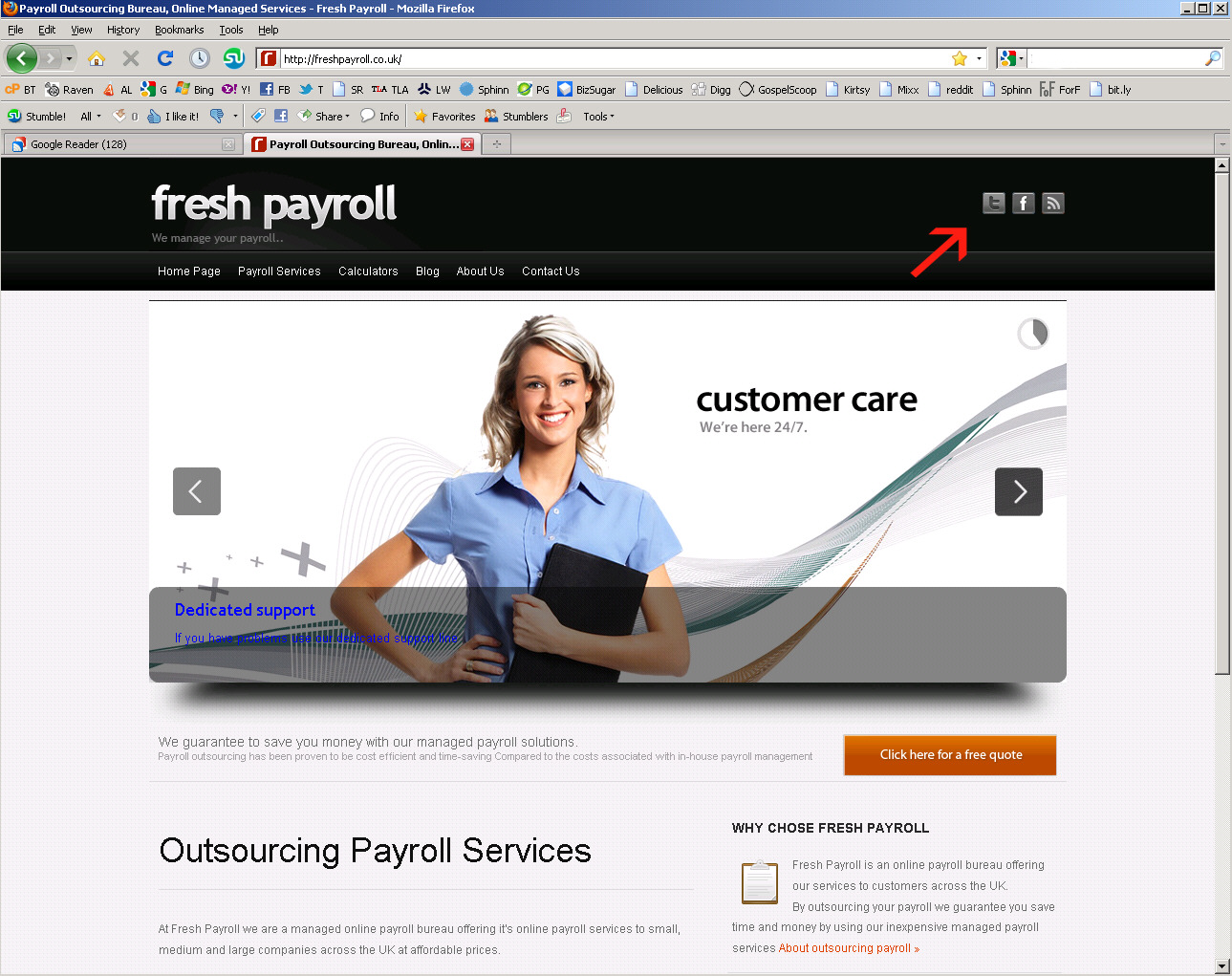 Think about ways you can incorporate multimedia such as video, infographics, images and the like into social media sites.

A great example of this was Toyota’s “Swagger Wagon” videos posted on YouTube which went viral, prompting Toyota to create a YouTube Channel dedicated to the “Swagger Wagon” series.

We do it for AdWords, that is create custom ads for each set of relative key phrases. Why not with social media? In other words, think about the community of each social media site you are looking to market on and customize your message for that base.

If you are a local business, Yelp is huge as far as claiming your listing and managing reviews but don’t neglect other local search engines such as Google Places, Yahoo! Local, Bing Local, CitySearch, SuperPages, Local.com and the like.

People love winning stuff and/or saving money. Keep your customer base engaged with your brand by offering them special promotions and discount codes as well as opportunities to win stuff via contests and giveaways. This can go a long way in keeping them coming back again and again.

Social media sites are a great platform to offer excellent customer service. They allow you the business to listen to what your customers are saying, both and bad, and the opportunity for you to engage them. never forget that today’s consumers have a lot more power than they did in the past prior to blogs and review sites. Try your best to keep them happy or they might look like this… 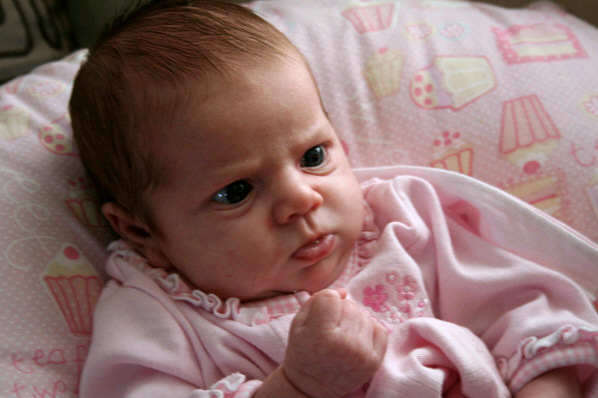 By setting up multiple social media profiles and then making sure they are indexed by the search engines, you can better control your online reputation in the organic search listing for your brand or brands. Because many of today’s social media sites are very authoritive sites, having profiles on these can help push down any negative listings that could harm your business. We recently pushed a Rip-Off report listing from the first page to the third using this technique.

I can summarize my presentation with the following takeaways: