This year’s Search Engine Strategies conference in Chicago was simply a blast. I attended last year but was only there for one day because a spot on a Site Clinic session opened up. I literally flew in Wednesday and left 24 hours later only leaving the hotel once to attend a party held at Buddy Guy’s Legends club. This time around, my wife and business partner, Irma joined me as we attended the entire week. We met tons of cool people and were able to experience some of the highlights of this fabulous city.

I did not attend that many sessions this year. I spoke on the “Working With Ad Agencies” session on Monday and also attended the “CSS, AJAX, Web 2.0 & Search Engines” session on Wednesday for which I will be writing an article for SearchDay. Other than that, the only thing I attended was Danny Sullivan’s keynote held on Wednesday. I walked the exhibit floor and even hung out for a couple of hours at the Webmasterradio.FM booth where Chris Boggs put me on the spot for a live The Pulse show they were doing. My comment most likely sounded stupid but at least I got on the radio. Part of the reason for the minimal session attendance had to do with late night parties but also due to the fact that this was really our first real visit to the city and we took the opportunity to enjoy some of it.

So what did we do? One of the highlights was visiting the Sears Tower, the third largest building in the world. They have made it a tourist attraction of sorts but at least it keeps all the business portion of the building separate from tourists wanting a bird’s eye view of the city. Called Skydeck, at a cost of $12 per person, an elevator whisks you to the 103rd floor in less than 70 seconds. I was a bit leery of the speed sensation I might experience but did not feel we were moving fast at all. Once on top, we spent probably a good half hour looking at and photographing the city. It was amazing to see what I consider very tall buildings simply dwarfed in the presence of this mammoth structure.

We also ate Chicago pizza three times, once at Giordano’s while Matt McGee accompanied us, a second time at Pizzeria Due during a gathering of SEM’s hosted by SEOfangirl and finally at Gino’s East while me and Irma were shopping on Thursday. Giordano’s won as my favorite while Irma liked Gino’s. I found out that I can actually order frozen Giordano’s via their web site. They make them fresh to order, freeze them overnight and ship the next day. Very tempting. Additionally we ended our Chicago eating experience at the famous Chicago Chop House.

We shopped The Magnificent Mile including a visit to the famous Water Tower Place shopping plaza. The Magnificent Mile is just what it states – a mile of shopping which includes just about every kind of store you can imagine. On our first trip to this popular shopping destination, Matt McGee joined us as he was looking for Christmas gifts at The Gap. Our second trip was to The Water Tower Place which ended up being one of the coldest days of the entire trip. I believe it got down to 11 degrees – pretty cold temperatures for Arizona natives.

One of the most adventurous things we did was to have dinner with about 12 other search marketers at the Evergreen restaurant in Chinatown. The meal itself wasn’t the adventure but rather leaving the restaurant. Not only was it absolutely freezing, there wasn’t a cab in sight. This area of town was also pretty desolate with the exception of homeless people roaming around. We thought of calling 3-4 cabs but that would have taken about 30 minutes. So we opted to head towards the train which was about 3-4 blocks away. Fortunate for us SEOfangirl, who was with us, was originally from Chicago and therefore was familiar with the train system. Many thanks to her for helping us escape Chinatown on a very chilly night. 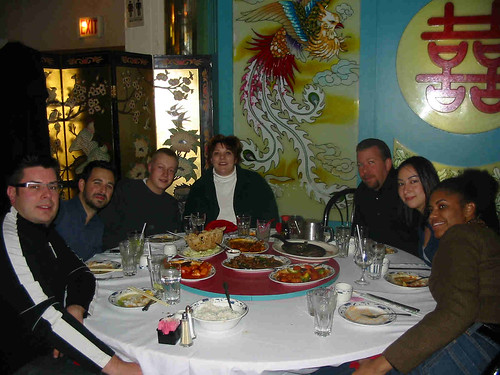 The best part of this trip (besides experiencing Chicago with my lovely wife, Irma) was all the people we spent time with. We hung out with many folks that we already know, met people that I know online in person for the first time and even met new people I’ve never met before. Following is a list in no particular order of all the fellow SEMs we either hung out with, ran in to or met during SES Chicago.

Li Evans who came up with a brilliant HatBait.com idea to not only gather pictures of SEMs in funny hats but met a ton of people, Matt McGee of who I was envious of his lakeside room compared to our inner room at The Hilton, Kim Krause Berg along with husband Eric, Lee Odden, Loren Baker who was a lot taller than I took him for, Jonathan Hochman, Chris Boggs, Mike Grehan who as always fascinated us with his wealth of knowledge and expertise in story-telling, Cameron Olthuis, Neil Patel who wants to meet my 18 year old daughter, Rob Kerry (aka evilgreenmonkey), Matt Bailey who shares my interest in classic cars (he has 64 Bug, I have 67 Mustang), Rand Fishkin who of course was sporting the yellow pumas, Rebecca Kelly, David Temple, Todd Malicoat, SEOfangirl (sorry don’t know here real name) Rich French who is a client in Chicago, Joe Morin, Jill Whalen, Ken Jurina who bought us dinner in Chinatown (thanks Ken), Barry Schwartz, Daron Babin and Brandy Shapiro Babin, Jeremy Shoemaker (aka Shoemoney), Andrea Shoemaker (Shoemoney’s sister and co-host of Net Income), Dana Todd, Jennifer Laycock with new baby Emmitt, Chris Sherman, Scott Orth, Ward Tongen, Frank Watson (aka aussiewebmaster), Melissa Wagner, Mike McDonald, Andy Beal, Jarrod Hunt who I discovered resides in my home town of Phoenix, Amanda Watlington, Lisa Barone, Justilien Gaspard, Dan Theis, Larry Mersman, Jim Hedger whom we have both read each other’s stuff for years but never met, Danny Sullivan, Elisabeth Osmeloski and last but not least, David Naylor whom we shared a cab ride to the airport on the way home. Alan Perkins was standing right next to our table at the hotel bar one evening talking with Li Evans and I didn’t even know it was him so neglected to meet him. Sorry Alan, maybe next conference. See all my pictures at SearchRank’s Flickr account.

I probably forgot some as we ran into so many people. If I did, please give me a shout and I’ll add you in. That is one of the great things about our industry is that we are like an big extended family. This was probably the best conference yet as far as networking and meeting up with people. Now looking forward to SES New York which will be my very first trip to the big city but my wife’s second.