What started with a three hour flight delay and three gate changes at the airport turned out to be another great SES, this time in New York City. While Irma and I were supposed to arrive in New York from Phoenix at about 4:30 pm, we actually did not get to our hotel till a little after 8 pm. The original plan was to attend the Internet Marketers of New York charity party, however because we were absolutely famished by the time we arrived (all we had eaten at this point in the day was an airport breakfast burrito), we opted to hook up with Matt McGee and head on over to the Stage Deli for dinner. Then it was over to the Hilton Bar where we met up some old friends.

On Tuesday I attended the In House Big SEO session for which I plan to write a future article for SearchDay. Unfortunately this would be the only complete session I’d attend. Irma and I did walk the exhibit halls as I always like to see Larry from Trellian, the magician that Unica always has in their booth and of course to try our luck at winning the Mini Cooper that AOL was giving away. Other than that, I think I caught the tail end of the Search Arbitrage Issues session and popped in real quick before the Link Baiting & Viral Search Success session to say hello to Jennifer Laycock who I had not seen yet up to that point. 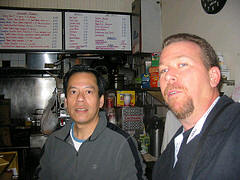 The big highlight of Tuesday was attending a live taping of Late Night with David Letterman. A group of sixteen of us including Irma, myself, Scott Orth and his wife, Matt McGee, Li Evans, SEOmozers Rebecca Kelly, Jane Copland and Scott Willoughby, Todd Malicoat, Kent Lewis, Ben Lloyd, Greg Meyer, Shannon Hall and I think a couple others but cannot remember names and faces right now. It was the first time I had ever attended any kind of live television show such as this. It was really neat to see how everything works together. Of course another highlight was meeting Rupert Jee of Hello Deli, a frequent part of the Late Show antics. A big thanks to Scott for getting us all in. It was fun to go as a group.

After the Late Show, Irma, Li and myself joined up with Jonathan Hochman to attend the private Google party which was held at the Ava Lounge down in what is known as the meat packing district. In fact, Google has office space directly across the hotel where the penthouse lounge is located. We decided to leave there a bit early as the party was mostly comprised of Google employees and their advertisers. We sat on the shuttle bus and our driver, Mike, entertained us for about an hour, telling us stories of New York and really providing us some great information about the city. In fact he even took us through Greenwich Village pointing out several points of interest including where one can get the best pizza in New York. I almost wanted him to stop the bus so we could grab a slice but there was a huge line of people already waiting for their. We ended the night at the Hilton Lounge. 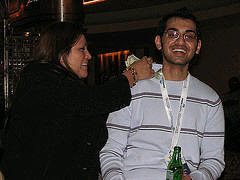 Wednesday was probably the best day for nightlife. First we attended the Marchex party thanks to Matt McGee and then proceeded to close both Hilton bars before heading up to bed at around 2 am. I know that is early compared to others who stay up till 4 – 5 am but we are not that big of drinkers. I say both Hilton bars because the first one stops serving drinks at 12 am and the second at 1 am or so. This is probably where Irma and I were able to hang out with the most amount of people. Let me see if I can recall everyone. besides who we had already hung out with thus so far, we hung out with Neil Patel and Cameron Olthuis, Kim Krause Berg and husband Eric, Jill Whalen, Christine Churchill, Debra Mastaler, Chris Boggs, Loren Baker, David Temple, Matt Bailey, Dana Todd and last but not least, Kevin Newcomb.

We had planned to visit to site of the World Trade Center and possibly even take the ferry out to Ellis Island to see the statue of Liberty but it was rainy. Therefore we opted to stay indoors until we were scheduled to attend the Broadway play – The Producers, that night. It was a great show and again, another new experience for me. Irma has attended an off-Broadway show before but never one on Broadway itself. I have to mention that just before our show, we ate at Alfredo of Rome where I had the best Fettuccini Alfredo I can remember. Food is definitely better in New York. After our show, I met up with some clients so we pretty much missed hanging out with any fellow search marketers that night. 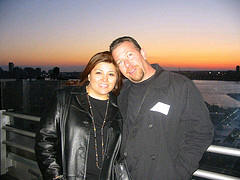 We capped the trip off with a couple slices of pizza from original Rays and a trip to the top of the Rockefeller Center for spectacular views of the city. Luckily our flight was on time unlike the trip out an we just escaped the bad weather that was to arrive in New York the next day.

It was a very good trip, not only because of all the friends we got to see and hang out with or the fact that it was my first trip to the big city but Irma and I also celebrated our 16th wedding anniversary. Hopefully we will be able to return next year and continue our exploration of this very unique city. I’ve at least got to come back and get my fettuccini/pizza fix and ride the Cyclone at Coney Island.