Surely everyone that is somewhat in tune to world events has heard of micro-blogging service Twitter by now. If you haven’t, come out of your cave and catch up on what is going on around you! Twitter is quickly becoming a mainstream site where people not only communicate but gather their information.

With Twitter’s popularity, brand managers everywhere are beginning to use the service to monitor conversations related to their brand and product names. This post examines some of the ways this is taking place and explores how you can use Twitter to manage the reputation of your brand online.

If you simply want to monitor references to your Twitter user name, the @ tab on Twitter.com or the @ reply function (if using third party application to utilize Twitter) will show every tweet that responds to you or mentions you. This can be especially useful in being able to respond directly with tweeples (a name for Twitter users). This of course is dependent on whether or not your user name is closely associated with your real name or one of your brand names (e.g., @Starbucks, @Pepsi, @Google).

One of the easiest ways to monitor a particular keyword, brand or product name is to conduct a search at Twitter Search (search.twitter.com) and then click on the RSS feed for that search query which is located at the very top of the right sidebar (example below) and add it to your RSS reader such as Google reader, Bloglines or other. 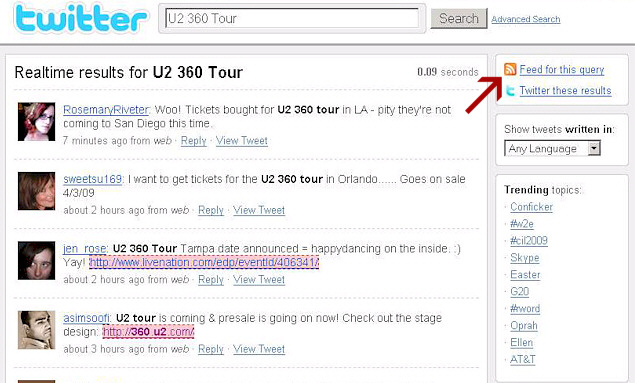 From then on, any mention of that keyword or phrase will display directly in your RSS reader. If you are like me and continuously have your RSS reader open, it is easy to catch mentions of keywords, brand name and the like that you are interested in almost as fast as they are mentioned on Twitter.

After polling some of my fellow Tweeps, Jill Whalen is also one that uses this method to monitor brand names.

TweetDeck – This is is a realtime application that allows users to monitor information in a single concise view. It integrates services from Twitter, Twitscoop, 12seconds, Stocktwits and now Facebook. Because mass of tweets can be somewhat overwhelming and difficult to digest, TweetDeck separates itself from other third party Twitter applications by allowing users to split their main Twitter feed (All Friends) into columns allowing a broader overview of tweets.

Grouping friends or work colleagues separately means you have a window on all aspects of your Twitter life. Searching across the Twittersphere means you can monitor any subject within Twitter. These additional columns automatically update so providing the user with a very effective dashboard of realtime information.

For example, I recently used the Twitter Search feature within TweetDeck to monitor conversations around SearchFest 2009. Setting the search up as a separate column, I was easily able to see and react to all conversation related to this conference which occurred last month in Portland.

One could just as easily do this for a specific keyword, keyword phrase or brand/product name.

Sideline – Sideline is an Adobe® AIR™ desktop application built with the Yahoo! User Interface Library (YUI). It displays real-time mentions of specific keywords, brands, or names and is capable of custom search groups, advanced queries, and refreshes the application with new mentions automatically.

The Yahoo Sideline project seems to have grown out of an internal project over at Yahoo, the goal of which was to create a desktop application that utilized Twitter, would be compatible with Mac OS X, Windows, and Linux with minimal work, and didn’t require learning new programming languages.

Bobby Kircher was one of those who responded to my Twitter poll related to this subject who uses Sideline.

Monitter – Monitter lets you “monitter” the Twitter world for a set of keywords and watch what people are saying… in real time. Just type three words into the three search boxes displayed on the site’s home page (where it says ‘monitter’ now..) and within seconds you’ll start seeing relevant tweets streaming live.

They also offer a widget that you can install on your site.

I could see this tool being useful if you needed to monitor a current conversation on Twitter. For example, Jet Blue may have found this tool useful to monitor what conversations were taking place when they had passengers stuck on the tarmac for hours and hours on end back in 2007. I could also see companies monitoring conversations in real time when they announce a special offering or possibly an acquisition of some sort.

BackTweets – Very simply, BackTweets allow you to enter any domain and see how many times it has been “linked” to within the Twitter world. While any decent backlinks checker may do the same thing, this tool narrows it down to Twitter and can help you to see how often twitter users are linking to your sites.

TweetBeep – This tool is like Google Alerts for Twitter. TweetBeep allows you to keep track of conversations that mention you, your products, or your company, with hourly updates. You can even keep track of who’s tweeting your website or blog, even if they use a shortened URL (e.g., tinyurl.com).

TwitterHawk – This paid service sends responses on your behalf to Twitter users that match your specific search criteria to help promote and market you and your brand… so you don’t have to. The cost to use the service is 5 cents per tweet.

I’m not sure how much I’d recommend a service such as this as it is not very personable, kind of like email auto-replies. However, if you are extremely busy but still want to acknowledge those who are talking about your brand on Twitter, it certainly seems like an interesting concept.

Two things seem to be certain in 2009 – Google will continue to dominate search and Twitter will continue to grow its user base. I’m not one of those who believes Twitter will take over Google as some have so foolishly speculated, mainly because Twitter is not a search engine. I do believe however that both services will become equally important in the way people search and communicate online.

In light of this, no matter what methods, tools or even services you use, it is going to become very important to monitor Twitter for mentions of your brand and product names. Brand managers have already been doing this with Google for years. Now another online service is reaching the state where those concerned with how their brand is being discussed better start listening and even more importantly, be willing to respond.

How about you, the reader? Is there a method, tool or service you use to monitor Twitter that I have not mentioned here? Most likely I’ve only skimmed the surface of how people monitor Twitter. If there are other methods and strategies, I’d love to get feedback in the comments section of this post.